As a Half-Orc she has:
Intimidating ( +2 racial bonus to Intimidate)
Darkvision, 60’
Sacred Tattoo ( +1 luck bonus to all saves) Tattooed as part of her initiation into the tribal mysteries. The work has left her strangely touched, but she is uncomfortable about some of the implications of the tattooing.
City Raised (Whip proficiency, +2 racial bonus to local) Raised in Belkzen Hold, her life was far less rustic than for those who live on the Storval Plateau.

She is a Caravan Guard for Melvin, having ridden the circuit around the storval plateau a few times. (Campaign)

The orcs of Belkzen Hold and Kaer Maga are notorious for their border skirmishes with the displaced Shoanti and other human settlements. Both people are bred for war. Half Orcs are often used for shock troops and her mother was picked out for her build and “strong hips”. (Race)

The Shamans of her tribe often brewed unsafe/disgusting concoctions that were supposed to improve the prowess of warriors in battle. One learned to drink quickly, for if you actually tasted them you were likely to throw up to everyone’s amusement.

Iron Liver There were many days that Ubada didn’t get to be selective about what she ate or drank. Many times she and other young half-orcs were fed inedible or toxic foods, especially when she tried to slip “safe” food to her mother. She eventually learned to catch her own food and avoid inedible plants, but not before developing an Iron Liver.

Drawbacks:
Ubada was tattooed as a youth during her training with the shaman. She often hides the Foul Brand on her hand with gloves.

She still has wracking guilt over not being able to save her mother, despite there being almost nothing she could do. Due to this guilt, she tends to be overly protective of those she cares about.

Ubada Longshanks is well named. Her height is a staggering 6’9”, taller than most Half-breeds. She weighs in at 275 lbs, an impressive size for a half-orc. She has thick black hair, grey eyes and greenish skin. She sports a tattoo sleeve which covers her left hand and forearm. She keeps this covered in public.

Region of Birth: Ubada was raised by her Orc sire Karrug Wolftamer. They lived among the Murdered Child tribe in the western outskirts of Belkzen Hold. Her childhood was rough, full of pain, torment and endless tests of strength and endurance. Before she learned to fully grasp language she already had a club in her hand. As all Orcs love martial prowess and violence, Ubada was determined to prove to her sire and the tribe that she would be a worthy warrior someday.

She showed promise as a fighter, not for any natural talent, but more from her stubbornness and perseverance. There was one thing Ubada could do, she learned how to take a beating without complaint and got back up again. Any that didn’t get back up were swiftly taught that the beatings would increase while you lied in the mud.

Childhood events: At the age of 8 seasons, Ubada was taken as a Shaman’s apprentice. Seer Felchek began the long and painful process of initiation including extensive tattooing, which many young orcs fail to survive. Thanks in part to her tenacity, Ubada learned to pierce the spirit veil and return with her mind and body intact. The full shamanic training would take years, during which time she was essentially Felchek’s slave.

Ubada had no relationship to her mother, a human broodmare slave with no name. Those who spoke of her referred to the poor girl as “wretch”. Karrug was the first to successfully impregnate her. What likely made the difference is Karrug made sure the wretched one was fed and cleaned regularly to decrease the chances of a miscarriage. This “act of generosity” was the only kindness the poor woman had known during her time as a captive, although it was done for purely good “animal husbandry” reasons.

After 4 years in apprenticeship to the Shaman, Ubada was tasked with reading the omens in preparation for a raid. She had no particular faith in the visions, never feeling any mystical awareness in the communing. She faked confidence in the successful outcome, believing that Felchek himself used subterfuge and vague prophesies to mislead. However when the raiding party returned severely beaten days later despite her forecast of great success, Felchek tossed her to the warriors in punishment.

She recognized the same look in their eyes as when they would lust after the wretched female. The abuse remained physical as they drank themselves into a stupor, delaying the inevitable to make her cringe and shrink even more. All expected that she was passed out from the beatings, but she came to before the warriors returned from heavy drinking. While they slept off their inebriation, Ubada hatched a plan to escape. She managed to snag a key to her chains from one of the men who accosted her, broke free and took the young woman she had come to realize was her mother with her.

Pivotal events: Ubada grabbed a horse, scared off the rest, and fled into the night without stopping for days. She eventually coaxed a few words out of her mother and learned about the city where she had grown up Magnimar. Never looking back, Ubada kept both of them alive in the wild. After about a year of struggle, first stopping in Urglin, then Kaer Maga which had suffered at the hands of a now powerful Archmage, they eventually made it to Sandpoint where she was able to get word to her mother’s family.

She tried to make herself welcome once they were reunited in Magnimar and stayed with her relatives while trying to nurse Adara, her mother, back to health. Adara never truly regained her sanity. She suffered for years from Stockholm syndrome which eventually lead to PTSD.

Ubada tried to make the best of her life, but she wasn’t terribly close to her mother. She tried to be, but didn’t know how to reach her through all that pain. She even blamed herself for physically reminding her mother of her tormentors. After her mother was sent to an asylum in Sandpoint, the rest of the family made it clear that Ubada would never truly be accepted. She was not openly threatened, but they always looked at her with sadness or pain in their eyes at the daily reminder.

She chose to start her life over at the age of 18 on the road to find a new home. She stays in Sandpoint at the Rusty Dragon Inn (Wyvern Room) for periods whenever she is in town to see her mother at Habe’s. Only Ameiko knows that Ubada visits her mother at at the Sanetarium.

Current: Two years later at 20 years of age she’s mostly happy. She has been making a name for herself as a reliable Caravan Guard having served several times with Mel’vin Jones as well as a few others. When waiting for Mel’vin to return after her brief personal stays in Sandpoint, she spends time with Sandru in the wilds around Sandpoint keeping the forests clear of goblins and sharing their game with local tanners and barkeeps.

Friend
Calamitous-Ubada treats him like a little brother, much to the hobbit’s chagrin.
Foil
Lossenmel-Ubada envies Loss’ easy adjustment to life and general acceptance. 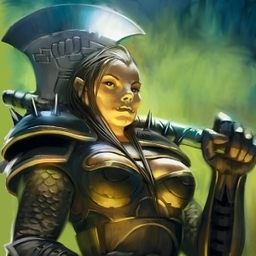