Puts the Bar in Bard

Ameiko is a beautiful but somewhat irreverent woman of Tian descent who runs Sandpoint’s Rusty Dragon tavern and happens to be a member of one of Sandpoint’s founding families. Her parents and older siblings have met unfortunate ends over the past several years, leaving the young woman as the sole remaining Kaijitsu in town.

Ameiko may be among the town’s nobility, but she’s never really cared for the aristocracy—she’s always had an urge to explore, and loves hearing stories of adventures and daring deeds. She even spent a year or so as an adventurer herself, along with her friend Sandru Vhiski. Her short adventuring career earned her enough money to buy the Rusty Dragon outright, and she now serves as its sole proprietor in her “retirement.” You get the feeling, though, that abandoning the adventuring life wasn’t entirely her choice—certainly she doesn’t talk much about what happened on her last adventure, or what happened to the others in her group. And although she has a lot of friends and admirers in town, Ameiko has never accepted anyone as anything more than a friend; she dodges personal questions and diplomatically avoids proposals of romance, much to the frustration of several eager suitors here in Sandpoint.

She’s a talented singer and samisen player, and if she wanted to, Ameiko could certainly lead a comfortable life here in Sandpoint. You know her fairly well, however, well enough to know that she is growing increasingly bored and impatient with having nothing more to look forward to than a “safe life” in a “safe town.” If the chance to go on an epic voyage or other grand adventure ever presents itself, you’re convinced that Ameiko would sell the Rusty Dragon and set out once more to seek her fortune in a heartbeat. 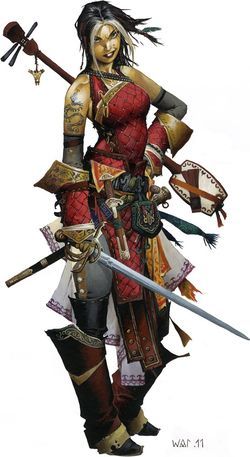